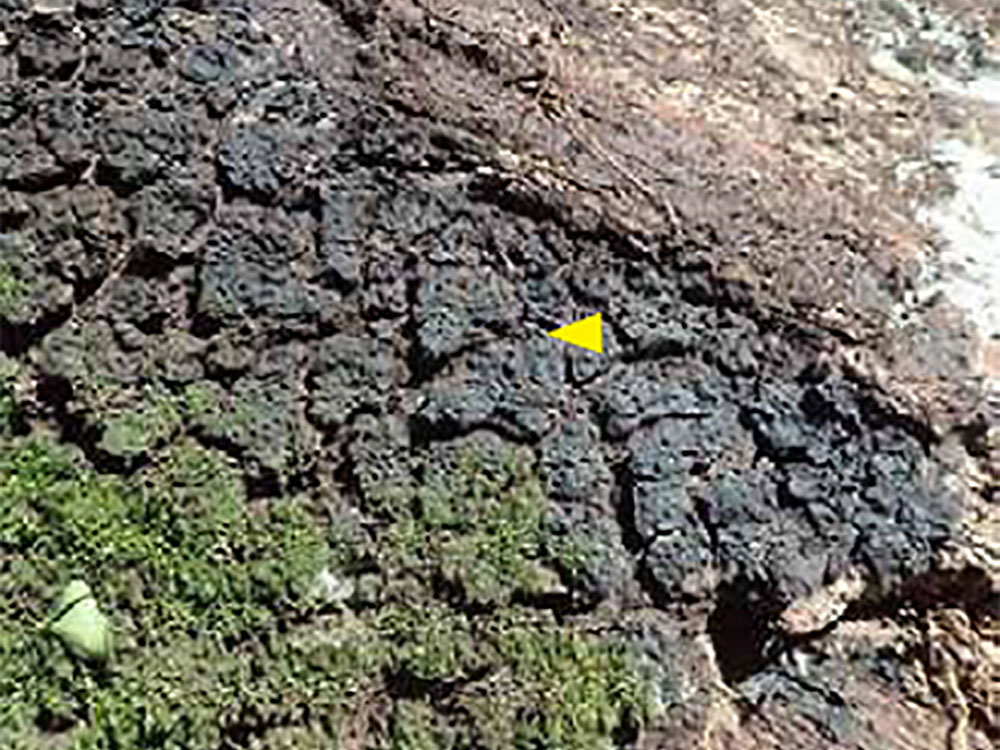 Brown Root Rot Phellinus noxius has been observed in Brisbane for some years and has become a problem for both privately and publicly owned trees. It is highly invasive and difficult to control. It has been observed in the Northern Rivers of NSW recently. It is likely to have been here for some time but has not been identified. This paper describes the fungus so that it may be more readily identified in the field by tree owners and managers.
This wood decay fungus was first described by Corner in 1932 and reclassified by Cunningham as Phellinus noxius in 1965. It belongs to the Fungi kingdom, in the phylum Basidiomycota, family Hymenochaetaceae (Bartz 2007). Its common name “Brown Root Rot” refers to the distinctive brown stocking that forms on the lower trunk and roots.

Brown Root Rot is found in tropical and subtropical regions throughout the world (Gams and Meyer 1998). In Australia, it occurs naturally in tropical and subtropical forests on the east coast from northern Queensland to northern NSW (Dept Employment 2017). It has recently been found in Eucalyptus, Ficus and Flindersia species in northern NSW; in Banora Point, Murwillumbah, Mullumbimby, Lennox Heads, Bangalow, Lismore and Grafton (pers. obs.). It is likely that the disease has been in northern NSW for some time but has been undiagnosed. It has spread to a wide range of cultivated trees including orchards and urban trees. Over 200 species are known to be affected from approximately 100 different genera. Gymnosperms and both monocots and dicots are affected (Bartz 2007). It has become a major pest and has killed many significant trees in Brisbane (Schwarze et al. 2012). It is a significant problem in Hoop Pine and Avocado plantations in Queensland (Dann et al. 2012).

The fungus causes wilting and the rapid decline and death of young trees. The leaves often turn brown and remain attached to the trees (Ann et al. 2002). In older trees, there may be discolouration of the leaves, crown thinning and eventual death of the tree. A characteristic brown stocking of dead and dying bark is often the main sign the tree is infected (see Photo 1 and 2). The stocking is usually found at the base of the trunk and on the roots. The stocking may have soil and brown fungal mycelia stuck to it (Ann et al. 2002.; Jones et al. 2015). It may not be present or only on the roots under the ground (Dept Employment 2017). The stocking has a white margin (see Photo 3) when actively growing that turns brown with age (Dept Employment 2017). In the advanced stages of decay, a conspicuous network of brown mycelial netting forms between the bark and wood (Greening 2017).

Brown Root Rot is a white rot fungus. It attacks the living parenchyma cells in the roots of the tree and kills them. The wood becomes discoloured and dies, disrupting the flow of water and nutrients to the tree (Bartz 2007). The fungus simultaneously digests cellulose, hemicellulose and lignin in the wood cells (Greening 2017). The wood becomes light, friable and honeycombed in the advanced stages of decay. In Figs, the dead wood has visible bands that are likely to be a result of the lignin being degraded and making the bands more obvious. More research needs to be done to look at how the disease progresses in trees with a lot of parenchyma compared to trees with little parenchyma (see Photo 4).

Brown Root Rot is sensitive to temperature. It grows quickly at 30C and does not grow well below 80C. The fungus is able to grow in acidic conditions as low as 3.5pH (Ann et al. 2002)The progression of the disease is much faster in young trees. In older trees, the progression is slower and may take many years
for the tree to die. The decay in the roots and lower trunk often result in the whole tree failing before it dies (see Photo 5). If young trees are planted into the infected soil, they will usually become diseased and die within a matter of months (Grose 2010). The fungus is root borne and is spread from root to root contact (Chang 1996). Phellinus noxius may remain viable in colonized roots in the soil for many years, possibly decades (Ann et al. 2002; Chang 1996). 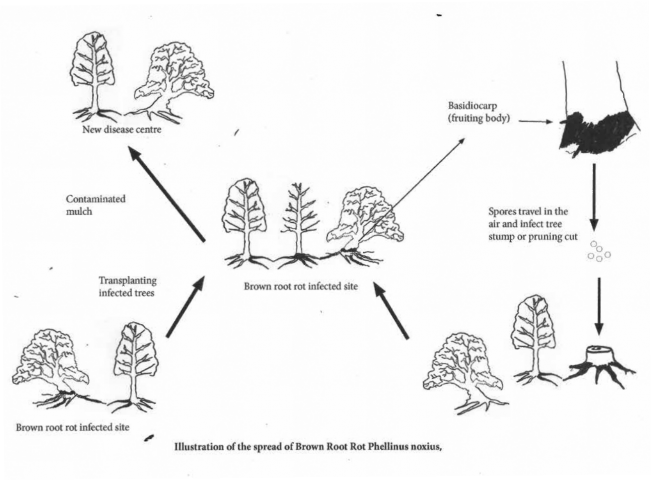 Two types of fruiting bodies are produced by the fungus. One is smooth and flat (resupinate) and forms on the underside of logs or buttress roots (see Photos 6 and 7). A hard, woody, brown or black bracket with a grey underside may form (Dept Employment 2017) (see Photo 8). Both basidiocarps produce airborne spores. These spores then spread around and can infect tree stumps and wounds in trees resulting in another disease centre (Ann et al. 1999).

Dann (2012), Dept Employment (2017) and Dept of Agriculture (2012) all recommend the use of root barriers to quarantine the affected area although there is no evidence of root barriers being effective in stopping the spread of the disease. There are a number of issues with the use of root barriers that mean they are unlikely to be effective for any extended period of time. For example, it is difficult to identifying the extent of infected roots, and inoculum can be transported across the barrier by people and macro organisms.

Recently work has been done using the beneficial fungus Trichoderma. The application of composted mulch to the surface of the soil and inoculation with Trichoderma has been shown to limit the progression of the disease in trees and to kill the disease in infected soil (Schwarze et al. 2012). The recent trials in Brisbane conducted by Enspec and Brisbane City Council have shown some promising results (MycoSolutions 2017).

Brown Root Rot is a pathogenic, infectious disease that is difficult to treat. It can remain viable in the soil and woody debris for decades (Dept. Agriculture 2012.; Chung 2015). It is occuring in urban areas where the affected trees are being cut down and mulched. It is important that arborists and other tree workers become aware of the disease and take care not to further spread it in infected mulch.

The debris from trees affected by Brown Root Rot is difficult to dispose of. The prefered methods of disposal include; burning, deep burying or composting. If the wood chip mulch is composted, turned over for 16 weeks and reaches 750C it will kill the fungus (Dept Agriculture 2012). The mulch can also be spread over the root zone of the tree that has been removed and allowed to decompose. That will contain the infected mulch in the area of soil already infected with Phellinus noxius 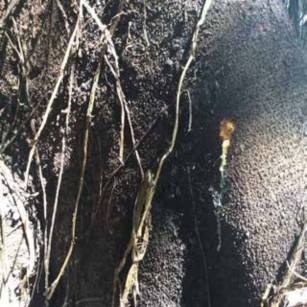 Photo 1.
Brown stocking of dead bark and fungal mycelia. A cut into the bark revealed dead wood. There is still sap movement in the affected area. 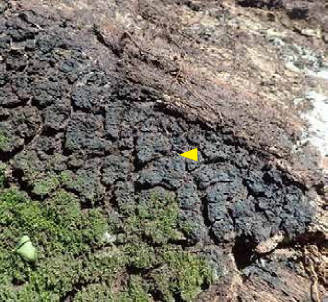 Photo 2.
The stocking has a distinctive ‘rice bubble’ appearance. 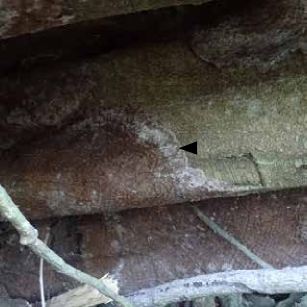 Photo 3.
This Fig tree failed. The brown stocking has a white margin. 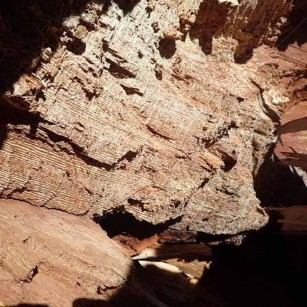 Photo 4.
The decayed wood of Fig has distinctive brown stripes. 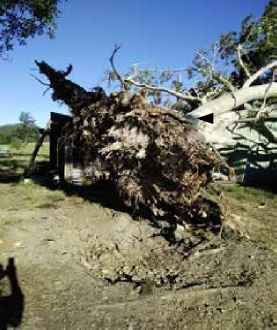 Photo 5.
This Fig tree has failed at the base. A dead brown section can be seen on the lower trunk. 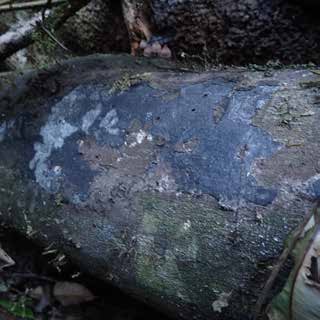 Photo 6.
As it matures the fruiting body turns grey or brown. 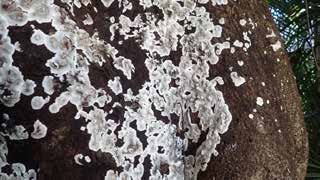 Photo 7.
The young, resupinate form of the fruiting bodies. 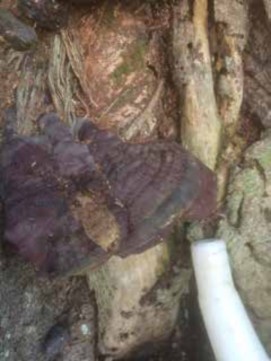 Photo 8
The bracket form of the fruiting body.

The presence of Phellinus noxius can be identified using a number of signs. They include the brown stocking sometimes with a white margin. The stocking is not always visible above the surface of the ground and the decayed wood cannot be seen unless the tree has failed. If the tree has failed, dead and decayed wood may be observed at the failure point. This makes positive identification problematic in some circumstances.

In order to assist identification, the fungus can be grown on from a small piece of infected wood in a 2% malt extract agar (MEA) plate (Chung et al. 2015).

A growing medium of Malt Extract Agar was prepared by heating 130 milligrams of water to simmering and adding 3.75 grams of MEA. The dissolved MEA was poured into plastic dishes and allowed to cool. The samples were placed into the Agar medium (see Photos 9 & 10. The temperature was maintained at approximately 18 to 200C.

After three days, fungal growth was observed on the agar plate. The fungal colony was brown in the centre with white hyphae at the edges (see Photos 11 & 12). This is consistent with the growth of Phellinus noxius that has been grown on as a culture (Ann et al. 2012).
Samples of infected material can be sent to a local plant pathology lab for final confirmation. 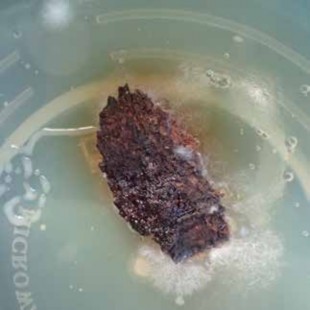 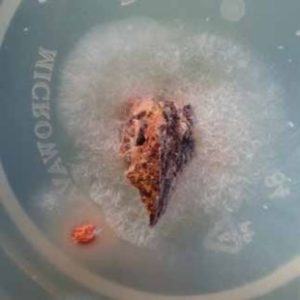 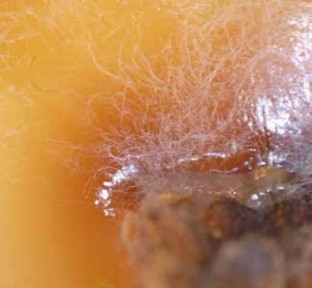 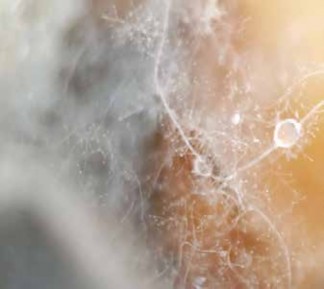 Chang TT. 1996. Survival of Phellinus noxius in Soil and in the Roots of Dead Host Plants. Phytopathology. 272-276. 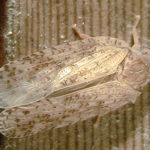 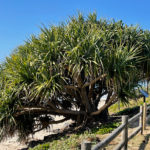 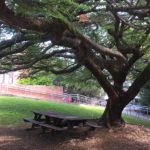 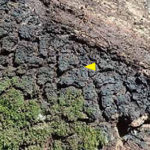